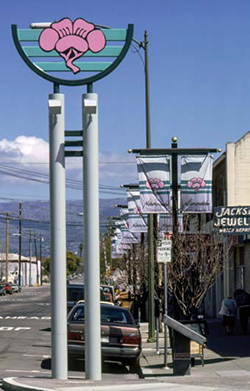 The following are corrections to errors found in the original 2014 printing of “San Jose Japantown: A Journey” ...

Page 20: New opening paragraph: San Jose was not first settled and developed in 1777, which is its founding date. The area which is now San Jose was part of a vast land inhabited by Native Americans long before the Spaniards arrived and long before California became part of the United States. Although evidence of the earliest Native Americans is currently lost to history, among the first documented inhabitants were the Ohlone. Archeological discoveries place Ohlone settlements in the region as early as 8000 B.C. The Muwekma Ohlone Tribe of the San Francisco Bay Area (www.muwekma.org) remains a part of this area to the present day, both politically and culturally.

Page 26: New caption to replace the existing caption: This 1890 San Jose Evening News article shows that highbinders (tong gang members) decided to build a wall around Heinlenville to discourage surprise raids by the police. But, didn’t John Heinlen already build a wall to protect the Chinese against anti-Asian aggression? One wonders who actually built the wall around Heinlenville. Courtesy of San Jose Mercury News

Page 38: Change name in the caption to “Jizaemon Akahoshi”

Page 40: New caption to replace the existing caption: A 1910 photo of R. Nishimura on a horse drawn cart by the brick building at North Sixth and Jackson Streets (currently owned by the Kogura family). This historic building was built for Chinese tenants in the same period as Heinlenville. By 1901, it housed the Japanese Employment Agency. Photo courtesy of Kanemoto Collection, JAMsj

Page 73: Replace existing lower photo caption with the following: Although the Nisei were a growing presence in Japantown, the Issei were still the dominant force in the community. Here, three prominent leaders meet with an important visitor in front of the Taihei Hotel. Left to right: Kinosuke Dobashi, Kanaye Nagasawa (renown winemaker from Napa, visiting Japantown), Kumataro Taketa, Kunisaku Mineta, and Kiichi Isonaga, Nagasawa’s nephew and driver. Photo courtesy of Helen Mineta

Page 113: Replace first paragraph of Ken Ying Low: Japantown’s First Restaurant with: The earliest restaurants in the neighborhood were Chinese, and Ken Ying Low was probably the first. When Heinlenville was completed in 1887, Ken Ying Low was one of the original tenants. The Ng family operated the restaurant and served Southern Chinese cuisine. In 1915, Ken Ying Low relocated to an old two-story building on Sixth Street that was originally inhabited by Chinese, and then became a Japanese boarding house. The Ng family hired the Nishiura Brothers to renovate the building’s façade with a balcony featuring a barrel-vault roof.

Page 209: Please replace the last sentence of the paragraph “Today, Chester Nozaki, aided by his wife … making tofu by hand” with the following:
“During the last years of operation, Chester Nozaki, aided by his wife, Amy, and daughter, produced tofu using the same process of his father and grandfather—making tofu by hand. After seven decades in business, San Jose Tofu closed its doors in December 2017.”

Page 321: On this page and in the index, the name of Rev. Morizono’s wife should be spelled “Callie.”

Page 323: Period missing at the end of the caption for Reverend Abiko’s photo.

Page 337: Replace sentence beginning 3rd paragraph, on 4th line: “Throughout its existence…” with: The San Jose Buddhist judokas have enjoyed enormous success, much of it through the efforts of Don “Moon” Kikuchi who served as head instructor from 1952 – 1992. With four national champions who have trained with the club, the San Jose Buddhist Judo Club celebrated its 70th anniversary in 2017. Sensei Don “Moon” Kikuchi was San Jose Buddhist Judo Club’s head instructor for over forty years, and was inducted into the US Judo Federation Hall of Fame in 1993. Photo courtesy of Dan Kikuchi.

Page 365: replace the current caption with: Pam Matsuoka’s plum blossom design atop the Japantown Gateway at North Fifth and Jackson Streets. The green stripes symbolize agricultural fields. Matsuoka drew on the fact that prunes and plums were an important part of the Santa Clara Valley agriculture. Photo by Curt Fukuda

Page 412 - 413: Replace text with the following updated text and add the new photo of Jackson Street showing the new development looming in the background.

The landscape of San Jose Japantown drastically changed with the looming seven-story development that occupies nearly the entire block bounded by Sixth, Seventh, Taylor, and Jackson Streets. With a presence that imposes on the view of the eastern foothills and hundreds of new residents, the development will have an impact on Japantown. Photo by Curt Fukuda

“The traffic in Japantown has definitely increased in the last few years. We see people who would normally not visit San Jose Japantown eating and shopping on a weekly basis. We understand the need to preserve, but we also understand that we are becoming more of a global society, and we will need to adapt and make necessary changes to address the needs of the community and future generations. Just returning from Japan, I realized that the world is changing at an alarming rate. Good or bad? I don’t know. All I know is that we will need to work together, accept change, respect and understand other cultures. I would like Japantown to take the lead in this movement rather than following from behind.” —Kurt Osaki, co-owner of the Hukilau

Today, many people ask, “Will Japantown survive?” “Will there be a Japantown in five or ten years?” These are the same questions that were asked in the 1970s when many Issei were positive that the Sansei had no interest in their Japanese heritage … that Japantown would vanish. It is difficult to predict whether Japantown will still be around in the coming decades. Are there enough Japanese nationals, Japanese Americans, or people interested in Japanese culture to sustain the Japanese American businesses? On one hand, JAMsj, the Buddhist church, Methodist church, Yu-Ai Kai, and JACL are fixtures in the community that draw Japanese Americans to the neighborhood and promote Japanese culture. On the other hand, the neighborhood’s demographics have changed over the past decades— Japantown is more of a Asian business center than a place where Japanese live.

The difference between the 1970s and 2020s is that there are now organizations dedicated to preserving and promoting the culture, history, and uniqueness of the neighborhood. San Jose Japantown is a living Asian community, not a destination artificially held together by a big corporation. Yet, one cannot help but realize how fragile it is. Despite the preservation of the neighborhood’s heritage, change is inevitable.

As of 2022, most Japantown businesses are family-owned. For now, there is still a small-town feel as you stroll down Jackson Street. Look, can you see? Nisei children returning from school, shouting, “Tadaima!” And their Issei parents replying, “Okairi.”