“San Jose Japantown - A Journey” was published by the Japanese American Museum of San Jose (JAMsj) in November 2014. More than a chronicle of Japantown, the book examined the Asian American experience in the United States. It brought together stories and photos from public archives and personal collections.

The book sold out within a year. JAMsj has not announced a date or plans for reprinting the book.

Day of the Dead - When Two Worlds Meet (2004)
by Dr. Shawn Haley and Curt Fukuda

For years, Curt photographed In Oaxaca with artist Lissa Jones. They collaborated in a series of painted photographs with Day of the Dead imagery.

Curt Fukuda met anthropologist Dr. Shawn Haley through Lucero Topete, director of the Instituto Cultural de Oaxaca. In 1997, Lucero suggested that Shawn and Curt collaborate on a book covering El Día de los Muertos in Oaxaca. Seven years later, the book became a reality. The main text was written by Shawn and the majority of the 200 photos were by Curt.

“Day of the Dead—When Two Worlds Meet” is the first time that the public can view unpainted versions of Curt's photos. The book also includes photographs by Shawn, Lissa Jones, Ellie Haley-Braun, and Monica Smith. The is published by and available through Berghahn Books. After three years of research, including interviews conducted in Paris, France, Don Hood and Curt put together an article on Marius and Daniel Lesoeur, the producers behind Eurociné Productions. Although Eurociné has existed since 1937, it’s really only the Eurociné films of the 1960's and 1970’s that have a cult following. Using directors of unique visions like Jess Franco and Jean Rollin, Eurociné turned out such wild films as “Female Vampire,” “Zombie Lake,” and “The Awful Doctor Orloff.”

For years, rumors and myths have been the only information available on Eurociné. Don and Curt’s article finally sheds light on the personalities behind all the eccentric Eurociné productions. Their interview reveals Marius and Daniel Lesoeur to be men of charm and humor, not the slimy pornographers that the public supposed them to be.

Due to space limitations, only a small portion of the original interview was published in Video Watchdog. Hopefully, the full uncut version may appear on this Web site in the future.

Sun Ra scholars Robert Campbell and Chris Trent wrote this monumental chronological overview of one of the most creative and elusive figures in jazz.

Curt has been a fan of Sun Ra’s music since the late 1960's. His first attended a Sun Ra concert in Santa Cruz, CA on December, 1974. For some odd reason, Curt brought along a cheap cassette tape recorder and recorded the entire concert. A copy of the tape, along with other information, was given to researcher Robert Campbell to provide an account of Sun Ra’s activities at the end of 1974. Campbell generously acknowledged Curt’s contribution in the book. 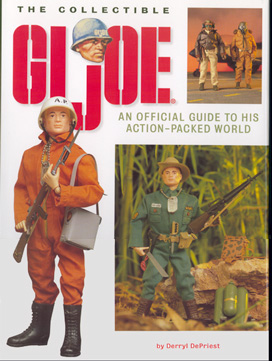 The Collectible G.I. Joe (1999)
by Derryl DePriest with photos by Curt Fukuda

G.I. Joe collector and Hasbro Product Manager, Derryl DePriest, and Curt met at the San Diego Comic Book Convention in 1996. In 1998, Derry invited Curt to do the photographs for a book on G.I. Joe. The publisher waited until two weeks before Christmas to approve the budget for the photographs, and then asked that all images be delivered before the holiday. For eight days in a freezing garage, Derryl and Curt photographed nearly 200 images for the book. Derryl constructed the marvelous sets, and provided all the G.I. Joe figures and accessories. Two wonderful sky backgrounds were painted by Monica Limas, who assisted Curt on many assignments from 1998 through 1999.

When the book was printed, the publisher goofed and forgot to credit the photography to Curt. Thankfully, Derryl mentioned Curt in the forward or there would be no mention of a photographer in the profusely-illustrated book.

The book sold out shortly after being released to book stores in October, 1999.

In 1993, the late William E. Ward introduced Curt Fukuda to Salvador Gonzalez. He felt that Curt and Salvador shared a deep interest in el Día de los Muertos (the Day of the Dead celebration). The following year, Salvador and his wife, Colleen, curated an exhibition of photos by Lissa Jones and Curt Fukuda at Folk Arte, their gallery in Cleveland, Ohio.

Eventually, Salvador proposed collaborating on a bi-lingual book of Día de los Muertos folk tales. He and Curt decided to self-publish the book.

During the production of the book Curt was fortunate to have the talents of Veronica Ramirez to design the book and Nina Vivian Huryn to create the illustrations. Monica Smith did the editing, both the English and some of the Spanish lanuage text. Monica and Curt re-wrote the English text to improve its flow.

In 1997, the book was printed by Serge Printing in San Carlos, CA. Monica and Curt put boxes of the book in the trunk of their car and travel throughout the Bay Area, trying to get bookstores to carry the book. By 2000, the book sold out and hasn’t been reprinted.